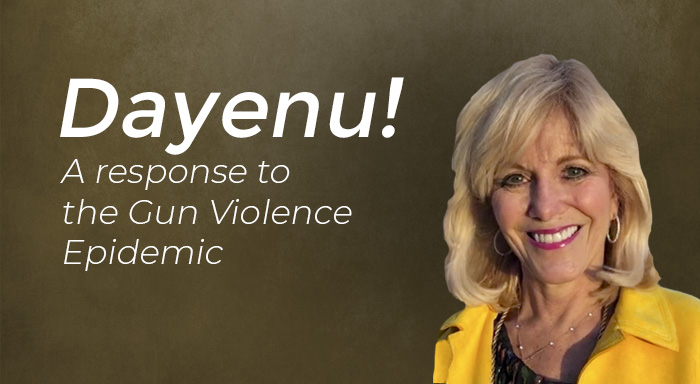 You’ve heard the names: Sandy Hook Elementary; Marjory Stoneman Douglas High School; The Tree of Life Synagogue; Poway Chabad Center; and most recently, Highlands Ranch STEM School. The tragic and unique bond that these institutions share is gun violence and being a victim of a mass shooting.

According to the Gun Violence Archive, to date in 2019, there have already been 18,604 gun violence incidents and 117 mass shootings (defined as indiscriminate rampages in public places with four or more victims) in the United States. It seems like gun violence and mass shootings have become so commonplace that our society has become desensitized to the gravity of this terrible epidemic.

Turning a blind eye and allowing our elected officials to bury their heads in the sand will not make this tragic issue go away. It should be deeply troubling to know that across our nation, our school children now have to contend with “active shooter” drills as part of their education day.

Support of victim’s families through “thoughts and prayers” is not enough. We must take action to ensure change will happen.   That is why Temple Emanuel created TEBH Safe, a gun violence prevention task force. This group formed in the aftermath of the shooting at Marjory Stoneman Douglas High School in Parkland, Florida. When the Pittsburgh Tree of Life Synagogue shooting occurred that is when our congregants said dayenu—enough is enough!

We are an active committee whose goal is to raise awareness and take action. We have created partnerships with organizations on a local and national level to help effect change in California and nationally to stop this insidious infection of gun violence.

We have the support of several dedicated congregants, one of whom is Andrea Grossman of Writers Bloc Presents. Writers Bloc partnered with Temple Emanuel and offered two public service programs regarding the gun violence epidemic featuring Congressmen Ted Lieu and Adam Schiff respectively. And we have more of these events lined up. Mark Kelly (astronaut, gun violence prevention activist and husband to former Arizona Senator Gabby Giffords) will be speaking with us in the fall.

TEBH Safe is also partnered with the Jewish Center for Justice and the URJ’s Religious Action Center, the latter of which hosted a Legislative Call-In week that Temple Emanuel participated in.  We joined a coalition of statewide synagogues calling on Governor Newsom to increase gun violence prevention program funding. These programs have been shown to reduce gun violence by as much as 40%, so we continue to push forward.

We need your help to ensure gun violence is once and for all controlled. Please join us. Get involved at
tebh.org/SocialJustice and help make a difference. As Margaret Meade said, “Never doubt that a small group of thoughtful, committed, citizens can change the world. Indeed, it is the only thing that ever has.”