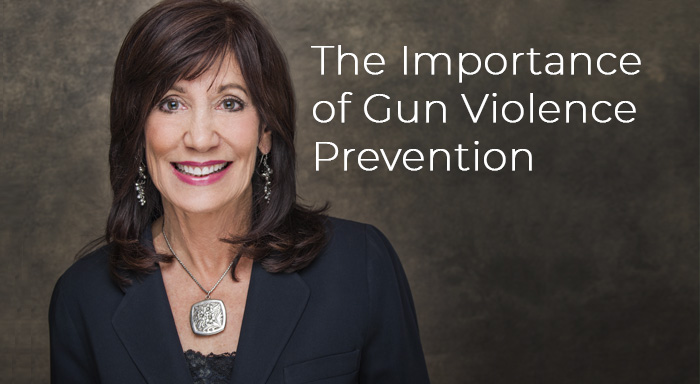 When I was a young girl in El Paso, Texas, a neighbor’s teenager was picking up a gun to borrow from a friend’s parents, who was going hunting with another friend over the weekend with their fathers. The mother carelessly left the gun near the front door. While the teenage neighbor was driving to the house, the four-year old son picked up the gun and accidentally shot himself and died.

I’ll never forget that as long as I live.

Social justice is integrated into the DNA of our temple

Whether it be carelessness on the part of gun owners, or horrific mass shootings in and out of our country, gun violence prevention must be the law of the land. I’m so proud to be a part of Temple Emanuel of Beverly Hills’ Na’aseh justice program. It was surreal having Congressman Ted Lieu speak to a full house at Temple Emanuel on gun violence prevention, with over 300 people in attendance, and all mesmerized, hearing his every word which ultimately generated over 150+ letters written to Congress that same day along with on-line emails. Rabbi Sarah Bassin was magnificently prepared with all the appropriate questions to ask Ted Lieu, as temple members who had relevant questions joined in as well. I’ve been a member of Temple Emanuel since 2001, and social justice is integrated into the DNA of our temple. It’s all about Tikkun Olam, healing the world, and making it a better place for all to live, no matter the ethnic or religious background.

The following week I attended a conference in Sacramento, and joined Moms Demand Action, representing our incredible temple to visit Assembly Member Richard Bloom’s office to talk to him about upcoming bills relating to gun violence prevention. Temple Emanuel and the entire Reform movement in California are supporting a proposal known as The California Violence Intervention Program that would increase state funding for gun violence prevention programs that have been proven to help the communities they serve. To add your support for the initiative, add your name to this online petition.

I don’t know about all of you, but I’m tired of waking up in the morning to the news of more shootings and more people being stripped of their lives, young and old, due to mass shootings. Please get involved in our Temple Emanuel community that will in fact make a difference. It’s empowering! Email RabbiBassin@tebh.org to learn more.